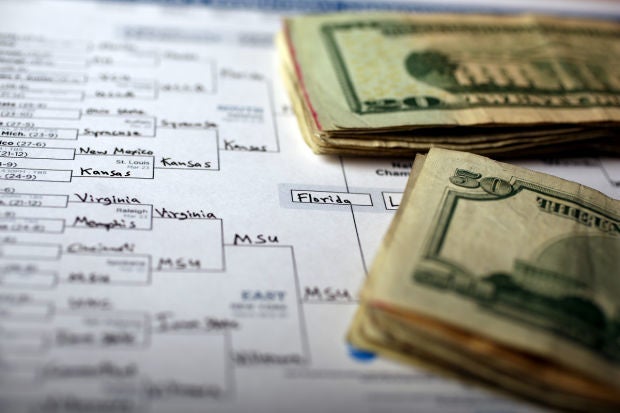 Brackets, pools, and "Cinderella Stories" my oh my!  March Madness brings a wave of excitement nationwide for serious, casual, and even the not-so-much sports fans. For employers, it can bring about a serious headache. Studies find that the average employee spends about 6 hours of their time during the NCAA tournament paying attention to sports-related activities instead of their work. And, some, even organize or sponsor tournament pools.  Of course, March Madness isn't the only time this can happen.  Fantasy Football and other fantasy sports run rampant where co-workers gather to draft their teams while enjoying rations and libations.  These can be great times, but be cautious.

Are office pools legal in the Washington workplace?

The simple answer is no.  But, like anything else in the law, there are exceptions.  Recently, you may have been at a Super Bowl party where you observed a large poster board with numerous squares.  You could write your name in a square and you were the owner of two numbers, one for the Rams and one for the Patriots.  And, if at the end of a quarter, the last digit in each score matched yours, you were the winner of a cash prize.

In 1973, when the Gambling Act was first passed, 100 square sports pool boards were authorized. This is the only type of sports betting allowed in Washington State.

Specifically, sports pools are allowed under Washington State Law (RCW 9.46.0335) as long as the board is based on a single athletic event, the board is divided into 100 equal squares, numbers representing game scores are randomly assigned to squares, and you must charge no more than one dollar per square. Only one sports board is allowed per sporting event per business or party.

What about the company Fantasy Football challenge?

Under Washington law, the element of risk means fantasy sports are a form of gambling.  That means anyone who has money riding on the outcome of an online fantasy football team is technically committing a felony.

Washington is one of five states where sites like DraftKings and FanDuel are outlawed. It comes down to defining what makes a “game of chance” versus a “game of skill.”  Under Washington law, a game is considered a game of chance when there's a “material degree” on chance. According to Chris Stearns—Chairman of the Washington State Gambling Commission— “Whereas in most states,” Stearns explains, “the fact that you've spent all this time poring over stats and making your own spreadsheets, that's the skill part, and that weighs most heavily.” So, if a game of skill even has a “material degree” of chance, under Washington law, it's considered gambling—and online gambling is illegal in the state.

What if I place my bets online over the Internet or through a reputable sports book?

Just no. For Washington State residents, all gambling on the Internet is illegal, including all types of sports betting. It's also risky, since many Internet gambling sites are operated from foreign countries with different laws. Players may not receive money even if they do win, and Washington residents have no legal way to claim their winnings from an online bet.

The answer is also “No” for your reputable bookie.  “Bookmaking” means accepting bets upon the outcome of future contingent events, as a business or in which the bettor is charged a fee or “vigorish” for the opportunity to place a bet. This is illegal and would be considered professional gambling. Professional gambling statutes range from first degree (class B felony) to third degree (gross misdemeanor) depending on several factors, including the amount of money and persons involved.  And, although you may not have legal recourse if your bookie doesn't pay, you can anonymously report the bookie and other illegal sports betting activity you encounter to the Washington State Gambling Commission.

So, will the vice squad raid my workplace if March Madness office pools continue?

the Washington State Gambling Commission is pretty sure no one has ever been prosecuted for betting on fantasy sports under Washington's uniquely tough gambling law.  So, despite all the potential criminal charges and negative talk about diminished worker productivity during March Madness, there are some benefits.  It can increase worker morale, including positive interactions among employees as they discuss bracket selections and support their chosen teams. Some employers set up viewing parties in company break rooms to further engage employees.  And, what's better than office pools where money changes hands?  Bragging rights over your co-workers until the next season.  Or, go to Las Vegas between March 16–31 to meet all your gambling needs.

The attorneys at the Law Offices of Torres & Haroldson are here for all your legal needs.  Contact us today for a free initial consultation.  Call now at 425-458-3170 or email us now at [email protected].